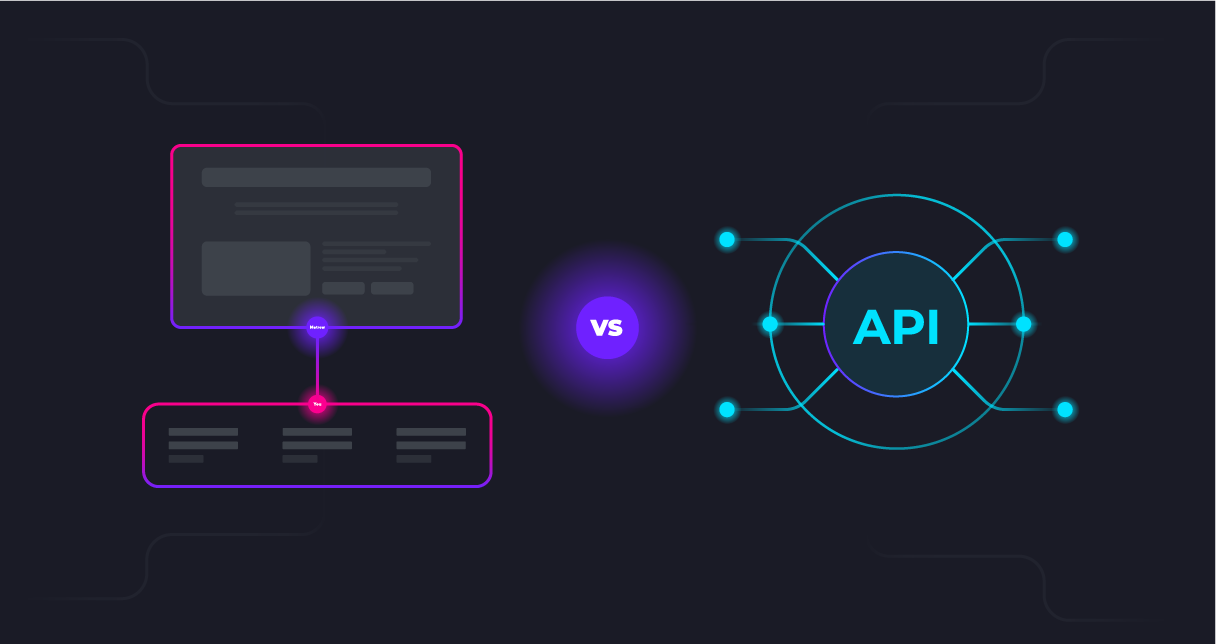 Web Scraping vs API: Which is Better?

Web scraping vs API are the two most common options when it comes to large scale data acquisition. While Data-as-a-Service (DaaS) businesses have propped up, they are still to take center stage. As such, web scraping and APIs remain the battleground of data extraction.

There are both significant benefits and drawbacks with each method. In short, web scraping will take longer to set up and necessitate more long-term management, but will provide significantly cheaper and more flexible data acquisition.

APIs, on the other hand, will provide nearly instant access to data extraction and won’t require any management, but will be more limited in the scope of information provided and may cost more than a web scraping solution.

Web scraping is the process of collecting online data through automated means. Usually, it involves writing a bot that can send requests to specific URLs and download the HTML file stored within.

Once data harvesting is complete, search functions are then used to find the necessary information within the HTML files. All the necessary data is then exported to an easy-to-understand file format such as JSON or CSV.

These steps can be interchangeable such as first downloading only a single piece of content, searching through it, and exporting into the desired format. In other words, the only set-in-stone part is forcing a bot to go through URLs and downloading the content.

They aren’t all equal in difficulty, however. For example, large ecommerce websites will usually have tremendous anti-bot protections in place, which can frequently target web scraping applications and ban them.

As such, using proxies (i.e. intermediary servers that can change IP addresses) becomes necessary. These have a two-fold benefit for web scraping tools as they can help circumvent bans and other troubling anti-bot features (e.g. CAPTCHAs). Additionally, each IP address has an associated location, which enables accurate data harvesting.

Locations are important because some websites only show specific content if they discover that an IP address is from some set country. For example, most travel and accommodation websites will have algorithms that may change prices depending on the customer’s location. Aggregating such data requires proxies as only then can web scraping solutions collect all pricing information.

Proxies do add to the costs of web scraping, though. While they’re not particularly expensive, they are absolutely necessary and need good performance to boot.

Additionally, web scraping tools can be somewhat hard to maintain. Small layout changes or the existence of different data harvesting sources means bots might need to be adjusted. Otherwise they might break and stop functioning.

Since these are complicated programming challenges, having dedicated developers will add to the price of the entire project. Frequent code updates and constant tinkering will be required, so it’s not a one-and-done deal either.

It is important to note, however, that it is no longer necessary to build web scraping software in-house. While it remains the cheaper option, there are plenty of web scraping service providers that will help anyone extract data at scale.

What is Application Programming Interface (API)?

An API is an intermediary or interface between two applications, which accepts commands and delivers some sort of output. In a data harvesting sense, an API would be something that provides access to some dataset.

A common example of a data extraction API is the Twitter Firehose. By paying a monthly fee, businesses can get access to the entire stream of tweets sent through the platform. Due to the insanely large volume of tweets, however, they have to be prepared to find the ones they need.

Other APIs might allow companies to interact with web scraping software, which makes it much easier to extract data from dedicated sources. In most cases, however, an API will be a single company providing their own data or an aggregator giving access to a slightly larger dataset.

As a result, APIs are usually significantly less flexible than web scraping. Additionally, they are often more costly methods to collect data as a business might have to buy access to several APIs for their needs.

Yet, there is almost no setup required, no operating system limitations, and real-time data is almost always available. There’s also little to no maintenance required and the data retrieved is always accurate.

Each of these problems can be solved within web scraping, but add a significant portion to the costs. Often, in-house development resources will be strained as the process is complicated enough already.

Finally, APIs can be harder to apply to cases where a large variety of data is required such as market research or threat intelligence. Datasets provided through APIs are usually quite narrow, dedicated to solving a specific problem (with only some exceptions such as the Firehose API).

In the end, web scraping will nearly always be the better option as long as you can support it. While it will take more effort to manage, the amount of data available will be greater and it will be cheaper.

APIs are useful only if you need highly specialized information that is impossible to scrape, difficult to obtain otherwise, or if you need quick and reliable results. In these cases APIs truly shine as an amazing method for data collection.