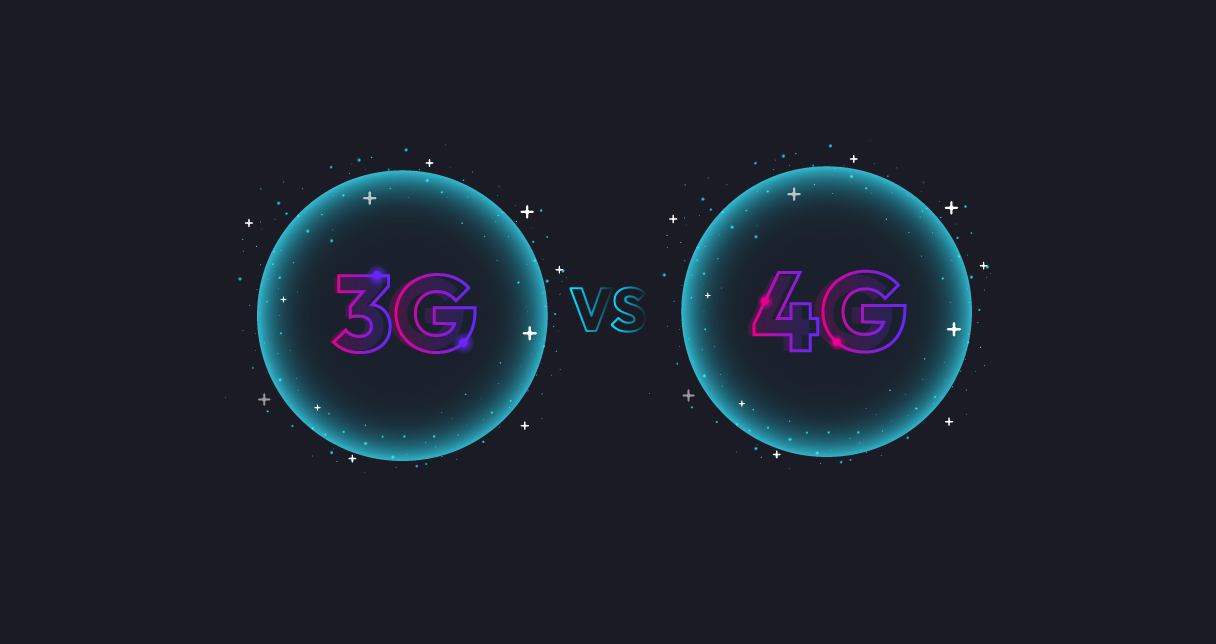 3G vs 4G: The Difference

3G and 4G are both mobile communication standards that describe the generations of technologies. As such, 3G stands for “Third Generation” while 4G is “Fourth Generation”. These standards essentially provide directions on how airwaves must be transmitted.

Both 3G and 4G technology enables complete data transmission unlike the previous generations where only mobile calls or texting was available. So, the differences between the two newer generations are not as pronounced. They are still important, however.

3G is the third generation mobile broadband standard that enabled larger and more diverse data formats. Previously, the second generation only allowed calling, texting, and MMS. As such, 3G enabled most of the smartphone features we know today such as reading HTMLs, pages, photos, videos, etc.

While 3G was significantly faster than 2G, it was still quite slow in comparison to other internet connection possibilities such as home networks. Most of the data transmitted through 3G networks still had to be relatively basic and, often, specifically formatted for the mobile phones to receive it.

Since the generations are primarily standards, mobile networks had to reach certain requirements before they could be considered 2G, 3G, or 4G. For 3G, the minimum data transfer rate had to be 144 kbit/s as set by the International Telecommunications Union (IMT).

Most service providers offered connectivity that exceeded the set minimum requirements. On the other hand, 3G has had different requirements if specific countries (e.g. China) chose not to follow the International Telecommunication Union directions to a T.

In the end, 3G has been on the way out for several years with many service providers ending support during 2022. While almost every mobile device will support 3G, it will soon be a little harder to find avenues for connection.

4G is the fourth generation of standards set by the IMT. These, however, weren’t as cleanly implemented as the previous generation due to some companies inventing stopgap solutions that didn’t fit everything set out by 4G.

As such, sometimes these are called 4G LTE (Long-Term Evolution) versions. While they couldn’t reach the standard of 100 Mbit/s, the service providers would still call it “4G”. Many people considered 4G LTE a simple marketing trick.

There is still some debate whether these early versions should be called 4th generation, but the IMT has rehabilitated them as they are still considered substantial advancements. These issues are no longer as pressing as they once were as true 4G is much more accessible nowadays.

Additionally, while the wireless broadband capabilities were greater, they weren’t distributed evenly. Reaching the required speeds consistently was harder and, coupled with the debate over the standards, some of the promised service quality wasn’t up to par.

4G, however, was still somewhat revolutionary as the much greater speeds enabled the mobile internet we know today. While 3G might have lagged significantly behind home networks, 4G brought it so close that the differences were largely negligible.

Speed wasn't the only thing that was upgraded in 4G. Previous versions used a connection technique known as circuit switching. Circuit switching, essentially, allocates a slot in the radio network whenever a call is made. It isn’t highly effective as the resources are in use even if the user isn’t communicating.

In 4G, the method was changed to packet switching instead. In short, this method sends data through the radio network in short bursts, reducing the overall burden caused by each connection.

Finally, there’s currently no end in sight for 4G. As many know, 5G has only begun deployment in many countries across the globe. Additionally, due to the insanely high speeds set as the standard for 5G, long-range airwaves had to be compromised, making a complete phase out of 4G unlikely, at least anytime soon.

How is 4G different from 3G technology?

Mobile proxies - should I choose 4G over 3G?

When it comes to mobile proxies, there’s no good reason why one would use 3G devices if 4G was available. Since 4G is already much more prevalent in almost all areas in the world, these proxies will often be equally as cheap as 3G. As the upgraded standard enables faster data transmission, these devices will perform better in almost all regards.

There is only one case when 3G might be necessary - when 4G coverage isn’t available. Geographical locations of proxies are important for certain tasks such as data acquisition. Since 4G isn’t widely available in less developed countries and rural areas, 3G mobile proxies might be the only option.

Since locations take precedence over connectivity speeds, users would be forced to use 3G mobile proxies. Other than that, it’s always better to pick the 4th generation mobile proxies.